The Story of The Dress 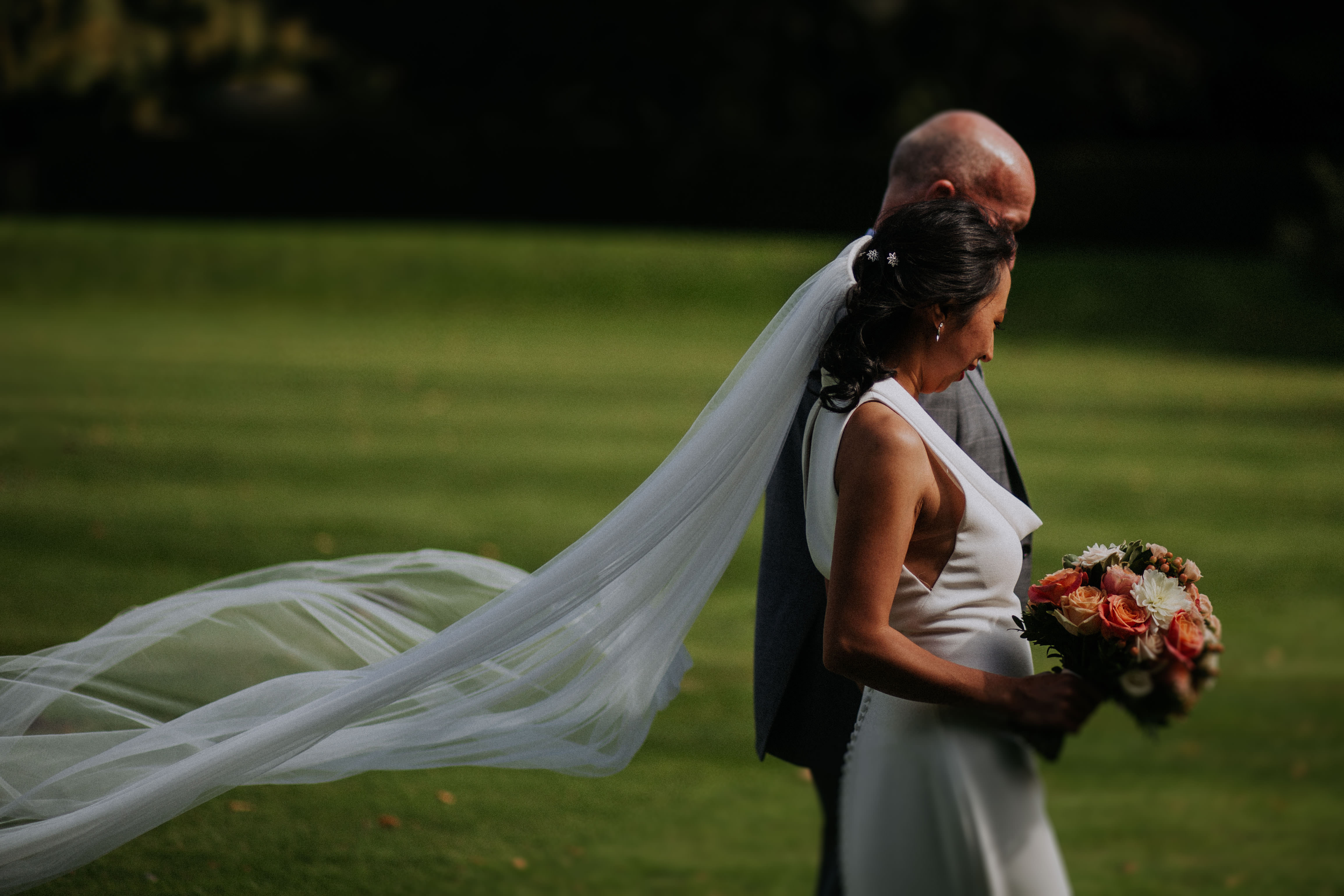 Yesterday was a wedding day, like a Saturday often is for me, and I was headed to Rushton Hall for the wedding of Nathalie and Mike, prepped, peppy and photo ready!

I arrived at 10.30am all ready for an hour of bridal prep before the wedding at 11.30am, only to discover a slightly sombre mood in camp because of the fact that Nathalie had no wedding dress. It turns out she had been unable to pick it up and was sat in the bridal suite in a basic slip dress, calmly waiting to get married. 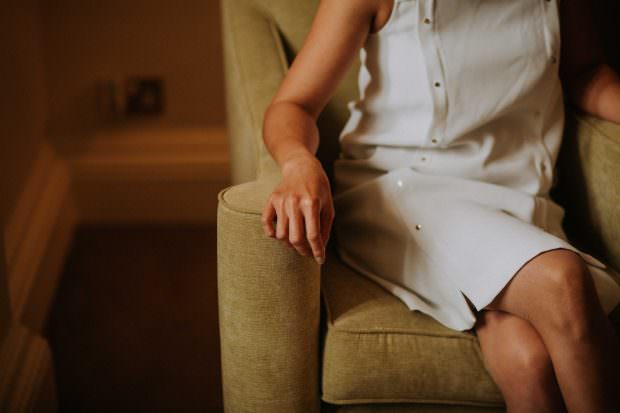 At this point, I would like to stress I am not writing this blog to name and shame the dress maker who let her down, I am writing it to commend the ones who came to her rescue…because quite frankly, what happened next, and for the rest of the day is more noteworthy and deserving of your time.

What followed was a bit of a blur but I did what any photographer in the area would have done, I called Courtyard Bridal. Having worked with the lovely ladies who run the family owned business before, I figured they would be our best bet, and I’m sure you can guess by now, that they did not disappoint.

“I HAVE A BRIDE WITH NO DRESS!”

“WHEN IS THE WEDDING?”

They swooped in like literal caped crusaders and bundled everything they could in to the car, promising they would be with us as soon as they could. Tears followed, as did a party play list, an abundance of hugs and a much improved mood. Now it felt like a wedding! 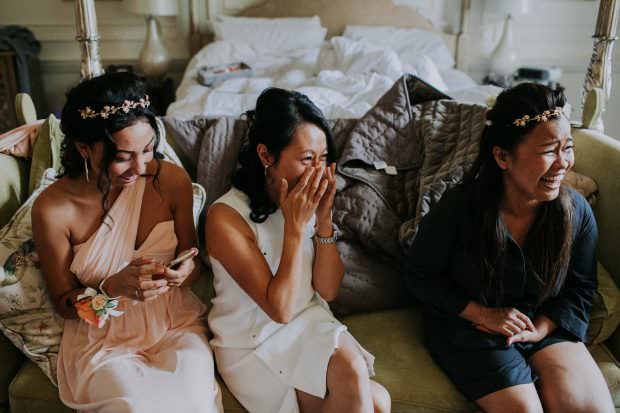 Nathalie is petite in every way and finding a wedding dress that fits is no easy feat, let alone one that wouldn’t completely swamp her height. I had no idea what to expect but later realised that Rhiannon had asked me all the right questions on the phone about her size, height and shoes…they were on the job! 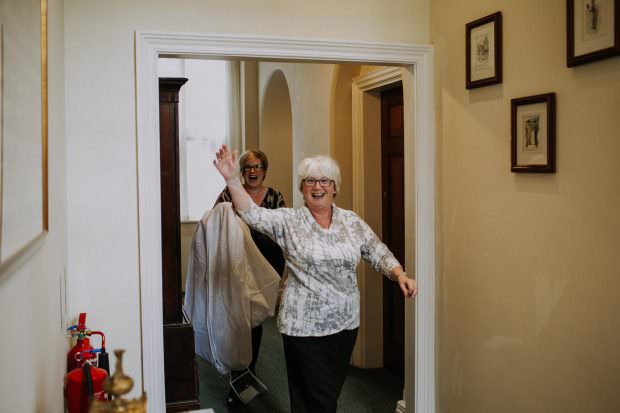 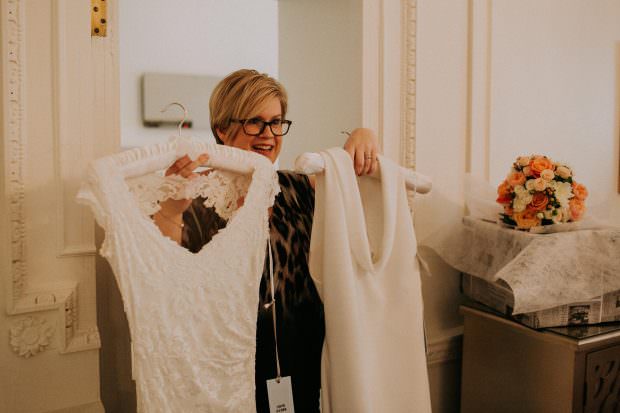 They arrived in a flurry and full of smiles at exactly eleven o’clock with two dresses, veils, pins, hair pieces and a sewing machine. Yep, you read that correctly, they even bought their overlocker. Nathalie tried both dresses on, and both of them fitted her, both of them looked amazing, both of them could have been made entirely for her, it was absolutely unbelievable. What happened next even more so. 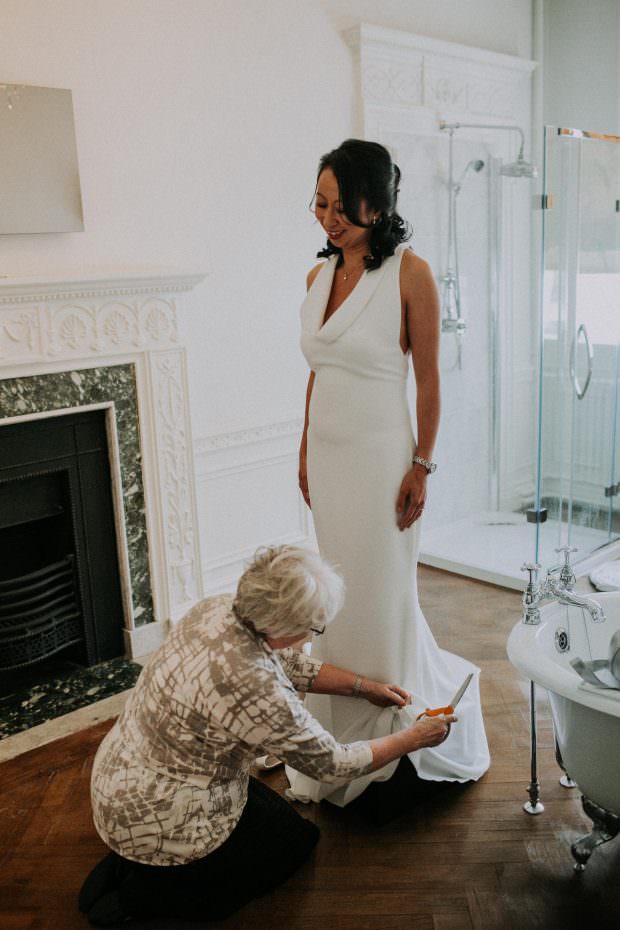 She chose the more classic and elegant of the two and Anne immediately set about making alterations. SHE MADE IMMEDIATE ALTERATIONS! Anne cut off the bottom of the dress in the bathroom while Nathalie stood on a box of breakfast bits from the hotel. She then overlocked the bottom hem so it was finished as well as taking a few buttons off the back, sewing a few on AND SEWING BRA CUPS IN TO THE FRONT. She was not about to have nipples on show at Rushton Hall, oh no no. 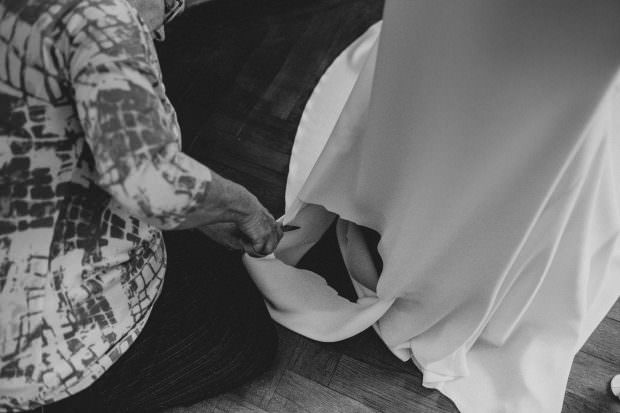 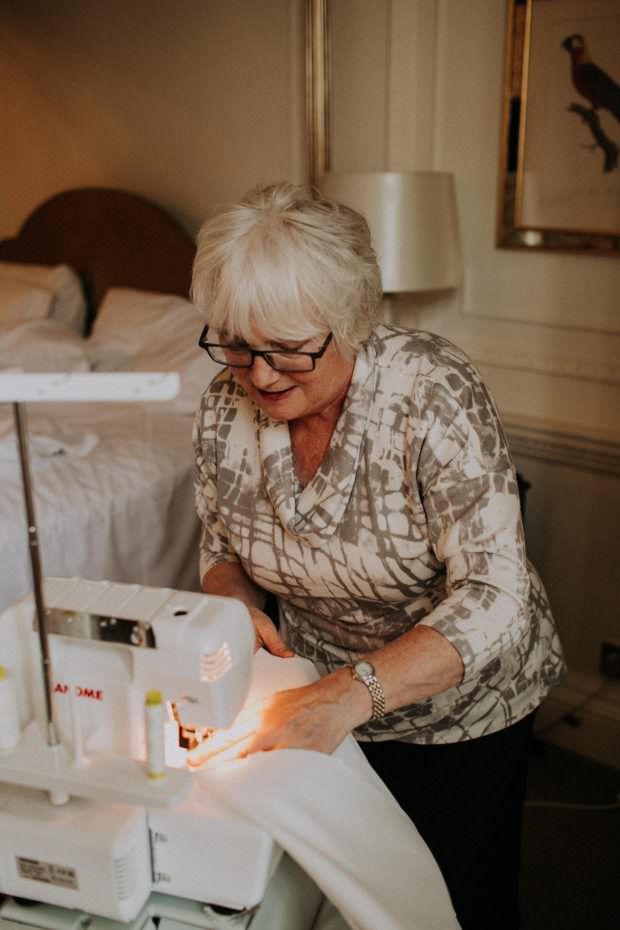 Time check: At this point we’re at about 11.30am. I continued to stay in touch with reception, the registrars have three other weddings to get to today but they’ll wait, if needs be they’ll cut a reading from the ceremony. The bridesmaids all arrive, Anne is still doing the finishing touches and the veil is going in. The master of ceremonies delivers Dad and we exit the bridal suite in a flourish at 11.45am with Anne and Rhiannon in tow to watch Nathalie down the aisle. THE WEDDING IS ON! 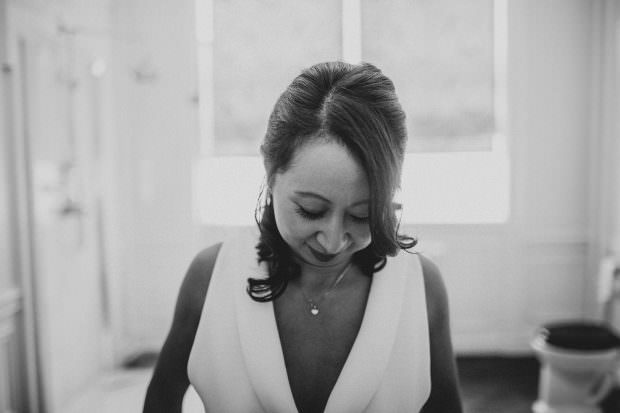 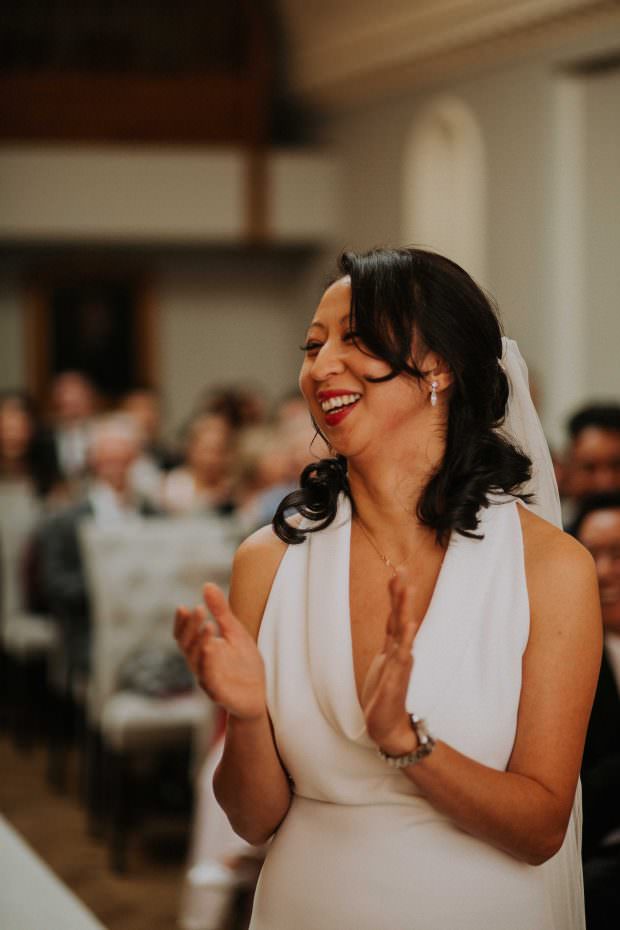 Despite Nathalie and Mike’s young boys being a little unruly throughout the ceremony the pair were married, Nathalie looked nothing short of AMAZING and the party was waiting. Everyone could return to business as usual. Which was why I was a little surprised to see Anne and Rhiannon outside when we exited, knowing they had a full day of appointments at the shop.  Turns out, in all the excitement of leaving the room, no one had thought to bring a key…and all available keys to the bridal suite were, yep, you guessed it…in the bridal suite. Invited to stay for a drink, the dynamic duo enjoyed some champagne while the hotel tried in vain to get in the room. They had no phones, no keys and no sewing machine and were now going to have to wait for a locksmith.

Rhiannon arranged for her husband to pick her up but Anne and I formed an alliance and not only did she help me organise my group shots, she became best friends with the bridesmaids, was centre of attention for all those wanting to hear about the dress and sat next to me for a delicious three course meal accompanied with some wine and cheese! 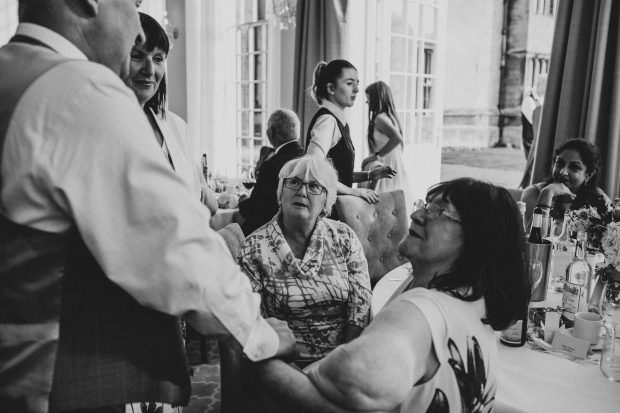 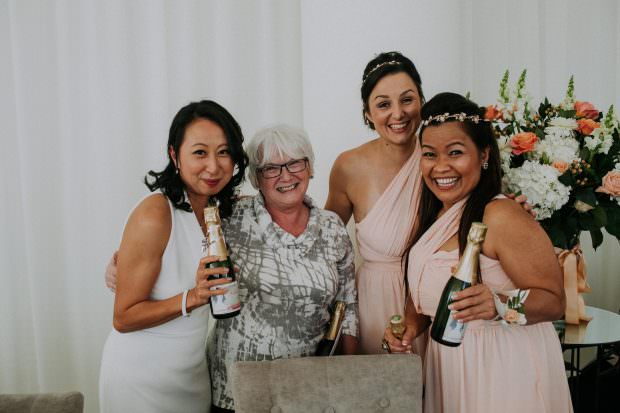 I literally can’t stress how diligently they worked to make sure Nathalie looked her absolute best and how wonderfully they managed the situation. They didn’t once falter or even consider not coming to help and they were there as fast as they could carry themselves.  Anne’s only complaint is that she wasn’t dressed for the occasion but in the end it didn’t matter and having Mike thank us all in his speech so earnestly for pulling the whole thing together just goes to show how much it meant to everyone involved.

The room was finally opened around 5.30pm and Anne could get all their stuff and go, although (and this is my favourite little detail) she’d had just a tad too much wine with dinner to drive so had to be picked up herself!

Before all this happened, I would recommend Courtyard Bridal as a great place to go to all the brides who asked, but now, I will be telling them that they’d be stupid to go anywhere else. 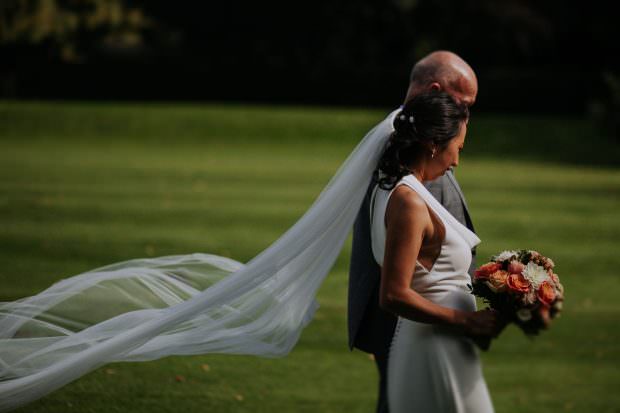 Nathalie would have looked beautiful regardless, I would have taken photos of her in her jeans, but the fact of the matter is she FELT amazing and it’s all down to a wonderful team of people who were willing to go that extra mile to help her out. 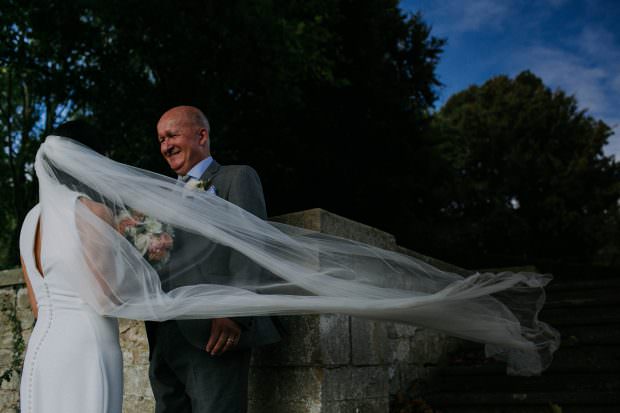 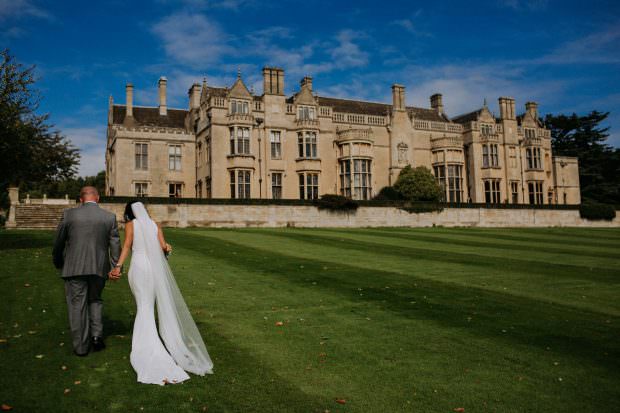 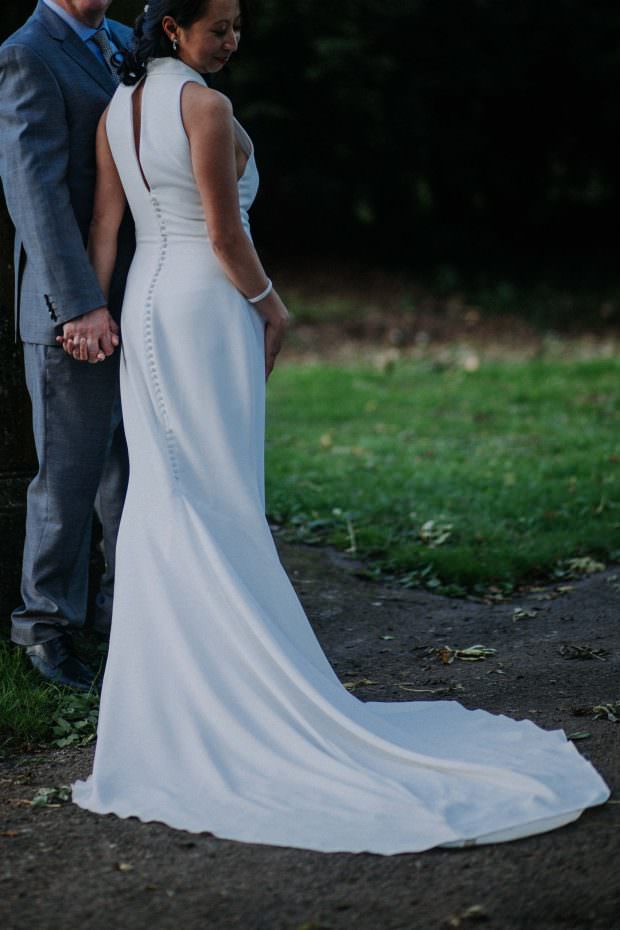 Nb. Her original dress turned up two hours after the ceremony and it was suggested she put it on. She declined.

The dress worn by Nathalie is Pronovias and is called ‘Niagara’